Just suppose you could do one thing to change a huge thing….. would you do it?  How about if I showed you how to change things in less than 20 seconds?   You see, the reason to hold back, or procrastinate, isn’t always at the point that we think it happens.  Procrastinating happens in many ways for many reasons, but once you know the root cause, change can happen!

Do you find yourself constantly saying “I’ll do it later or tomorrow or next month or when I have more time” rather than simply just taking action.  Things like asking for a pay-rise, applying for a new job, asking for help from someone?  Going for a jog or making a phone call?  Sorting through your wardrobe?  Completing your tax return? 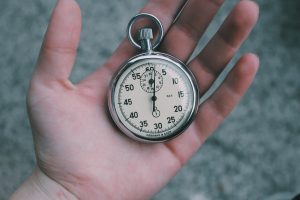 The Psychology of Procrastination

So why do we put things off.  A recent study that you can read about HERE suggests that we need to take a grip of our emotions rather than find more hours in the day.  People who procrastinate tend to be more hesitant and anxious about the potential negative consequences.  The fear that the boss will say no to the pay rise or you will fail at getting the job, the idea that the tax return might be wrong (or ask you to pay lots of money), the energy and effort to sort through your wardrobe.  You get the idea.

Ladies and Gentlemen…. I bring to you the idea of “20 Seconds of Bravery”.

It actually only takes 20 seconds… not that whole build up of pain as you imagine.  Whilst an idea is in your mind, in the planning, in the putting together – it is safe to explore.  Let me tell you how it changed my life!

A real life example of 20 seconds of bravery vs procrastination!

Now I had this ‘thing’ that I really wanted to do. It was taking a step out of my comfort zone and putting myself into a place where it might not work out.  The first thing to do would be making contact with someone that I didn’t particularly know, and making a suggestion.  I had sat on this idea for a while, thinking how amazing it would be if….. And I had done nothing about it.  I really wanted to take action but there were many invisible  barriers in the way.  By nature, I am somebody who will take a risk and take action, but for this – nope, there were many blocks!

So when I read Claire’s status, it then occurred to me that if I broke the task down into smaller sections, many of those sections weren’t a problem and the thing that was holding me back would take less than 20 seconds.

Thinking of the idea – done!  The idea was mapped out in the safe space of my brain and hadn’t required any effort, brave steps and I hadn’t taken any risks.

Writing my email – also an easy thing to do.  Nobody is reading it, and I can just see how it looks when written down.  No risks and no brave steps taken.  I turned on my computer and tapped out some words.

Putting the email address into the To: part of the email.  That was also easy – nobody has yet read the email – this hasn’t taken any courage whatsoever.

So you get the point.  Up until this point, it has been easy.  No emotion or stress or potential anxiety.  Just a small set of steps taken by me and not caused me any issue.  No reason to procrastinate as it is only me reading what was on my screen.  Almost like playing out the day-dream.

PRESS SEND…..  And that was the bit that I was procrastinating about however it actually took less than 20 seconds of bravery.  That is all.  Just 20 seconds to reach out and press the button.

So I pressed it.  After all, 20 seconds isn’t long to feel discomfort.  Felt pretty good afterwards in a OMG what have I just done sort of way.

How could you use 20 seconds of bravery?  or Courage?  Or Effort?

Have a think about what you could do, that you haven’t done.  I bet it can break down into small steps and the actual ‘hard bit’ also only takes you 20 seconds.

Making a phone call?  There isn’t any effort about pulling the number up on the screen or mapping out in your mind about what you could say.  The 20 seconds is pressing Call and waiting for the person to answer.

Completing your tax return?  Logging on, Filling in the bit that is your name and address, putting in your income…. etc.  The painful bit is pressing send.  20 seconds!  That’s all!.  (And you can log back in and make amendments!)

Going through your wardrobe?  Take out one item that needs to be recycled as it doesn’t work for you any more and recycle it.  Just one item.  Will take 20 seconds!!  Realise how easy it was and decide whether to do a second item.

You get the picture?

Take my challenge.  What can YOU do in 20 seconds or less that could have a big impact?  Then do it!  Leave me a comment for what you did (or intend to do) for 20 seconds of bravery.  That also takes less than 20 seconds to press comment!!

You may be wondering what happened for my 20 seconds?  It worked perfectly!  My dream idea is up and running and I am so excited 🙂

Thanks for reading.  I am a Hypnotherapist and Coach.  If you want to make some changes to how life is panning out for you, then please get in touch by calling me on 07786134541.  I offer a free consultation and would love to meet you.

I have recently launched my new website in working with business men who are hitting some barriers and pressures, offering coaching. Please get in touch for more details or take a look at at my site HERE

Other blogs include my blog on procrastination