Coronation Street tackled the huge topic of male suicide this week through the death of Aiden Connor, who took his own life after secretly battling depression for months and finding himself unable to talk to family and friends about his plight.  (Link to Coronation Street story )   Coronation Street wrote the scenes in conjunction with the Samaritans and CALM (Campaign Against Living Miserably).

Suicide isn’t a popular topic of conversation so storylines like this one can really save lives.  As a character, Aiden was a popular, good looking guy, who had his life ahead of him.  Successful business, money in the bank, a close knit and supportive family and solid friends.  But as the real life statistics demonstrate, people who seem to have it ‘all to live for’ are equally at risk from feeling like they cannot continue. 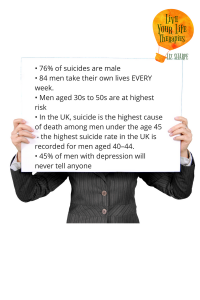 Not all depressed people feel suicidal but depression is the most common condition associated with suicide.  With suicide affecting so many people and families – why isn’t it being talked about more?

Men and Suicide: Why it’s a social issue

There is a high expectation for men to perform in line with stereotypical roles, attributes and behaviours that society expects of them.  The “masculine gold standard” of power, feeling in control and invincibility – with feelings of shame, inferiority or defeat if they don’t meet that standard.  Times and stereotypes are rapidly changing for younger generations now, but having a job or status and ‘being a man’ equals feeling in control.  The Samaritans comment that when men are depressed or in crisis, they can feel out of control, and be propelled towards suicidal behaviour as a way of regaining control.

Do you remember that term… ‘Big boys don’t cry’, ‘Strong upper lip’, ‘Who is a brave little soldier’?  Times are changing and boys are being taught to show their feelings, however previous generations weren’t given this message so strongly.

Use of Alcohol or drugs

Statistics show that men are more likely to use alcohol or drugs to cope with crisis or distress.  Alcohol and drugs can lower your inhibitions and leave you feeling more vulnerable and out of control.

Research has suggested that a man relies on his emotional partners for support, so if he is then faced with a relationship breakdown or being separated from his children, he loses a huge part of his support network.  How about if we add it to the fact that male peer groups and friendship circles tend to decrease after 30?  Loneliness is a very significant cause of a high risk of suicide.

And the risk for older men?

Suicide is most strongly associated with depression, physical pain and illness, living alone and feelings of hopelessness and guilt.

If these symptoms sound like you or someone you know – get some help.  Speak to your doctor, call one of the helplines, contact a therapist or tell a family member or friend.  It doesn’t have to feel like this.  Help is available.  And people WANT to help. 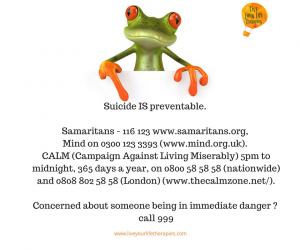 Learn about how to help someone at risk

The Zero Suicide Alliance is a collaborative of National Health Service Trusts,

The alliance is ultimately concerned with improving support for people contemplating suicide by raising awareness of and promoting FREE suicide prevention training which is accessible to all. For more information, click on  zerosuicidealliance.com

CALM (Campaign Against Living Miserably) is a registered charity, which exists to prevent male suicide in the UK.  Phone: 0800 58 58 58
Website: thecalmzone.net

I am a Counsellor, Hypnotherapist and Coach, and have worked with people who experience anxiety, depression and tension for 20 years.   I specialise in working with men who want to overcome barriers in their work and personal lives so that they can move forward with ease and confidence to create the success they want.  Click here to read  ABOUT ME

Hope you enjoyed this article and it has provoked a conversation with somebody you know.  Please share it with anyone who may find it useful.  84 deaths a week through male suicide?  Something needs to change.  Let us start that change NOW.